I am so honored, grateful, and inspired to have received this review by Maddalena De Leo, who is the Italian Representative of the Brontë Society (La Sezione Italiana della Brontë Society).

Professor De Leo understands, appreciates, and encapsulates the novel with such sensitivity and eloquence. Thank you, Maddalena!

The novel by DM Denton, Without the Veil Between – Anne Brontë: A Fine and Subtle Spirit, puts the accent on the lesser known of the three Brontë sisters, the British authors who have become famous throughout the world in the last century. I remember that forty years ago their name appeared little in the European encyclopedias, and Anne, the third sister, was mentioned only by name, without even knowing that she had written two novels instead.

Today, however, Anne Brontë has been greatly re-evaluated and in the last twenty years, thanks to translations of her works in various languages and a BBC production of her second and longer novel, she is considered, in some respects, even the most modern of the three. With grace and discretion, DM Denton, through this novel, wants to start an unaware reader [on] the path of endurance carried forward with determination and modesty by the “smallest” of the sisters, tracing the developments during the last seven years of [her] life. It highlights those that were characteristics in her, already common to the other two, namely the determination and courage to assert their ideas often deviating from the conventions of the time.

Through the succession of chapters in the book, where the historical-biographical information is dutifully mixed with the imagination, we discover wonderful family pictures in which we are almost in contact with the daily life of the Brontë family; we see discussions and small skirmishes between the sisters; we live and share the constant concerns of all of them with regard to their brother Branwell, who is on the wrong path and with no return.

Above all, through the well-measured words of Denton, a young Anne emerges more and more, especially in the final chapters. She frees from the web of religiosity with which she traditionally is painted, [and] tries to leave something good in the world through her measured but deliberately targeted writing. A different Anne at the beginning of the book, timidly in love, and then resigned to accept her own death with dignity and fortitude without moving the reader piteously, as often happens in various modern biographies or film biopic transpositions. All this is to give credit to Diane M. Denton who, with her delightful pencil drawings on the inside but also on the cover of the book, has contributed to make a meaningful homage to the memory of Anne Brontë. 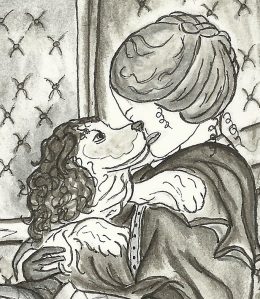 Illustration from “Without the Veil Between” Available with others from artspan.com

Adieu, but let me cherish, still,
The hope with which I cannot part.
~ from Farewell by Anne Brontë

Besides being the Italian representative for The Brontë Society and on The Brontë Studies editorial board, Maddalena has worked very hard for many years to have the Brontë sisters known in Italy and worldwide. She has translated Brontë works and written fascinating articles about the Brontës, which you can read on the Bronte Society in Italy Section of The Sisters Room: A Bronte-Inspired Blog.

Without the Veil Between, Anne Bronte: A Fine and Subtle Spirit
is available in print and for Kindle devices and app

Italy: (in English; in Inglese) amazon.it

and through amazon in many other countries 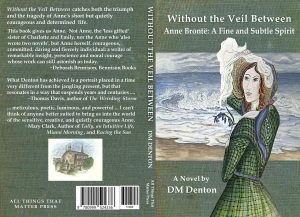 A pur-fect opportunity to remind

my blog visitors and readers that

all my author profits

from my Kindle Short Story

The story is only

Available in other countries, too

Download free app to read on your pc, laptop, tablet, or phone

Irene had been a little unnerved by the Italian’s ice-blue eyes, but how could he compete with the possibility of her following in the footsteps of Lillian Lorraine, the Dolly sisters, Marilyn Miller and Fanny Brice? 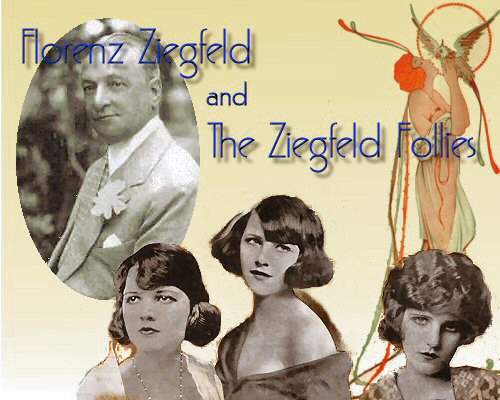 This short story, inspired by my maternal grandmother, Marion Allers DiCesare,  has been ruminating in my imagination for a long time.
Read more here: Picking Flowers off Wallpaper.

Yoshi and Kenji thank you!

Thank you to Deborah Bennison of Bennison Books for offering her editing expertise and refined literary eye and sensibilities towards the publication of Escaping Ziegfeld.