It was November 24, 1834. Emily Brontë was sixteen, her youngest sister Anne fourteen, when they wrote the first of their diary papers (this one jointly, although it is thought the majority of it was Emily’s doing, noting the use of the pronoun “I”, the references to Anne, the run-on sentences and spelling errors, and the sudden slip from reality into fantasy: Gondal).

These are the kind of tidbits from the past that inspire my writing the most, coming, as they do, out of everyday, intimate moments in time, very ordinary and uneventful, but, also, extraordinary, revealing, and, certainly in this case, poignant considering these two adolescent girls living in the moment with such innocent hopes for the future … that never came.

I fed Rainbow, Diamond, Snowflake Jasper pheasent alias this morning Branwell went down to Mr Drivers and brought news that Sir Robert peel was going to be invited to stand for Leeds Anne and I have been peeling Apples for Charlotte to make an apple pudding and for Aunts [illegible] and apple Charlotte said she made puddings perfectly and she was of a quick but lim[i]ted Intellect Taby said just now come Anne pillopatate (i.e. pill a potato) Aunt has come into the Kitchen just now and said where are your feet Anne Anne answered on the floor Aunt papa opened the parlour Door and gave Branwell a Letter saying here Branwell read this and show it to your Aunt and Charlotte – The Gondals are discovering the interior of Gaaldine Sally mosley is washing in the back- Kitchin

It is past Twelve o’clock Anne and I have not tidied ourselves, done our bed work or done our lessons and we want to go out to play We are going to have for Dinner Boiled Beef, Turnips, potato’s and applepudding the Kitchin is in a very untidy state Anne and I have not Done our music exercise which consists of b majer Taby said on my putting a pen in her face Ya pitter pottering there instead of pilling a potate I answered O Dear, O Dear, O Dear I will derictly with that I get up, take a Knife and begin pilling (finished pilling the potatos papa going to walk Mr Sunderland expected 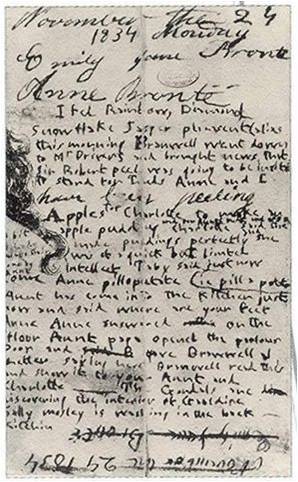 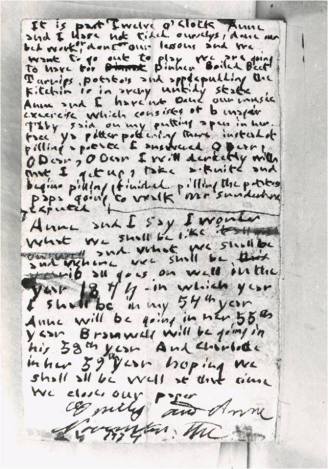 Have you purchased your copy of Without the Veil Between: Anne Brontë, A Fine and Subtle Spirit yet? Have you read it or is it on your TBR list? I’m running a contest for anyone who posts a review on Amazon and/Goodreads and/their blog before December 31, 2018. Follow link or click on image below for more details.

Diane Denton has narrated, through Anne’s sensibility, the cruelest yet most beautiful part of this remarkable family’s story.
~ Recommendation on Without the Veil Between’s Facebook page

“If the only prayer you say in your life is ‘thank you,’

that would suffice.” ~ Meister Eckhart

Once again
she touched the emptiness with
a stroke of genius, had
a brush with color, used
her sense of shape and style, portrayed
her imagination with
simplicity and sophistication, and
found her purpose in doing
what she loved
for the sake of being
lost
in everything
she was meant to be.

At 89, my mom, June, doesn’t do any art now. The illustration is a card she made four years ago.

Last year I spent Thanksgiving Day with her at the rehab facility she was recovering in after being in the hospital with a severe infection.

So grateful to have her at home this year.

“Do not grow old, no matter how long you live. Never cease to stand like curious children before the Great Mystery into which we were born.” ~ Albert Einstein

to all in the US

Gratitude is a most powerful healer. 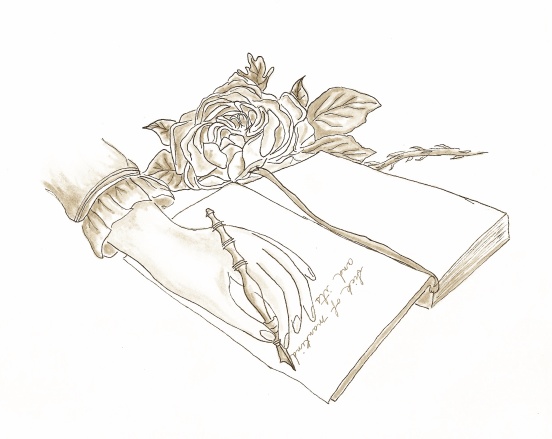 What though the Sun had left my sky;
To save me from despair
The blessed Moon arose on high,
And shone serenely there.

I watched her, with a tearful gaze,
Rise slowly o’er the hill,
While through the dim horizon’s haze
Her light gleamed faint and chill.

I thought such wan and lifeless beams
Could ne’er my heart repay
For the bright sun’s most transient gleams
That cheered me through the day:

But, as above that mist’s control
She rose, and brighter shone,
I felt her light upon my soul;
But now–that light is gone!

Thick vapours snatched her from my sight,
And I was darkling left,
All in the cold and gloomy night,
Of light and hope bereft:

Until, methought, a little star
Shone forth with trembling ray,
To cheer me with its light afar–
But that, too, passed away.

Anon, an earthly meteor blazed
The gloomy darkness through;
I smiled, yet trembled while I gazed–
But that soon vanished too!

And darker, drearier fell the night
Upon my spirit then;–
But what is that faint struggling light?
Is it the Moon again?

The candle Anne was writing by had almost burnt down. She wanted to finish the letter to Lily and get up early to post it in Thorpe Underwood village before Mary knew she was gone. She had heard Mrs. Robinson mention that she, the girls, and young Edmund were going to Great Ouseburn and the Greenhows for lunch and riding. Anne half expected to be asked along as there had been talk of her teaching their young children. The invitation never came and it seemed tomorrow, a schooling day, might be a full one off for Anne, another hint her employment with the Robinsons was nearing its end.

The nine verses of Fluctuations took up most of the inside of the letter to be folded, sealed, and stamped without an envelope. She scratched the remainder of it vertically across what was already written, like Charlotte, never one to be brief, often did. Anne smiled to think of her oldest living sister and her well-meaning verging on oppression. Lily had reminded Anne how private even casual acquaintances, those who didn’t know anyone she did and were unrelated to her past or future, were akin to that other side of solitude, not censorious but releasing. They were like shooting stars and meteors appearing and disappearing, brightening and lightening moments otherwise rendered bleak and burdened by inescapable bonds and unbearable losses.

On impulse Anne reached for her Book of Common Prayer, opening it to the blank back of its inside cover and wrote “sick of mankind and its disgusting ways”, causing injury to her prayer book and merciful nature.

~ from Without the Veil Between, Anne Bronte: A Fine and Subtle Spirit

‘Sick of mankind and their disgusting ways’
written in the back of Anne Brontë’s prayer book.’ It is enlarged here – need a magnifying glass to read it in its original form. Biographer Winifred Gerin wrote: ‘It was meant for no eyes but hers . . .’

Have you read, are you reading,

or are you planning on reading

Without the Veil Between, Anne Brontë: A Fine & Subtle Spirit?

Would you like to win a lovely, limited edition prize?

go to: Contest! Review “Without the Veil Between” and Enter to Win!

Please note in comments on this post or the linked page
that you have written and posted a review and where.
Or contact me to let me know.
Thank you in advance!

The holidays are coming! Have some Brontë aficionados on your gift list?

Just a reminder that there are prints, notecards, and other items created from the artwork from Without the Veil Between
that are available for purchase.

The light was low,

~ an oldie by DM Denton

1. Out of clutter, find simplicity
2. From discord, find harmony
3. In the middle of a difficulty lies opportunity