“Please, take my hand,” Charlotte reached back to her sister, “or I’m afraid I’ll lose you like a feather in this wind.”

AFTERWORD from
Without the Veil Between, Anne Brontë: A Fine and Subtle Spirit

Anne Brontë died in Scarborough on Monday, May 28, 1849 at about two in the afternoon. Charlotte and Ellen Nussey were at her bedside in Wood’s Lodgings where the Grand Hotel now stands.

Charlotte made the decision to have her youngest sister buried “where the flower had fallen” rather than transport her body back to Haworth. Besides Charlotte and Ellen, the only other mourner at Anne’s Christ Church funeral was their former Roe Head mistress, Miss Wooler, who owned a house on the North Bay. Anne was interred in St. Mary’s churchyard on Castle Hill overlooking the sea.

I longed to view that bliss divine,
Which eye hath never seen;
Like Moses, I would see his face
Without the veil between.
~ from Anne Brontë’s poem, A Happy Day in February 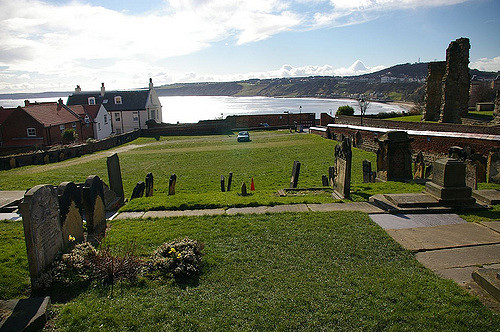 There is no doubt that Anne Brontë’s dying words – “Take courage” – to her sole surviving sister, Charlotte, present a moving finale to her earthly story.

On the Death of Anne Bronte by Charlotte Bronte

Well into writing Without the Veil Between, I decided to portray Anne’s death without the scene of her final moments. I wanted her last days to unfold on its pages as they did for Anne herself, not as a lament but with gratefulness for her fine and subtle, purposeful and poetic life without end.

My soul is awakened, my spirit is soaring and carried aloft on the wings of the breeze.
~ Anne Brontë, Agnes Grey

Anne’s insistence, a few days before she died, not only on taking a donkey ride on Scarborough’s south sands, but on doing so alone and driving the cart herself, because she didn’t want the donkey pulling it to be mistreated, begged to be expanded out of the footnotes of her history. Her actions and reasons exemplified her quiet determination and independence, kind heart, strong conscience, and desire to do some good even as her life was drawing to an end far too soon.

He picked up the reins. Anne noticed he also had a whip in his left hand.

“A gentle drive, please.” Anne couldn’t be sure of the lad’s compliance until he put the whip away. They began to move along at a pace that didn’t jolt her body or feel rushed.

After about five minutes the whip was in his hand again. “This ain’t a funeral, ole girl.” He cracked it across the donkey’s hind quarters.

The donkey stopped and kicked up her back legs. The lad lifted his arm to strike her a second time.

“Stop it.” Anne grabbed the reins, the blanket sliding to her feet. If she couldn’t be his equal in physical strength then in will. “Get off. I’ll drive myself.”

Anne was almost in tears, leaning perilously forward to stroke the donkey where the boy had hit her. “Don’t you know it’s wicked to beat her? How would you like it? What if it was done to you?”

His eyes told her it had been.

Imagining his story, she struggled with continuing to scold him, but, also, realized an opportunity to make him more empathetic. “Animals live and feel as we do. You must remember that in how you treat them.”

Illustration by DM Denton from Without the Veil Between

Anne didn’t feel guilty escaping. She had saved Millie and herself from the dominance of others for a while and thought driving the cart might show Charlotte the holiday was doing her good. In truth, Anne was moving away from the exhausting fight to survive towards surrendering to the precious time she had left. The curve of the bay was all hers. A beautiful sparkling headland lay ahead. The dip and lift of gulls and equally roguish clouds were almost indistinguishable as was the sea sounding near and far.

Anne wanted dying to be welcome and welcoming, releasing and promising, like driving along the shore that afternoon and how she had tried to steer her life, her hands on the reins but faith guiding her progress.

Graying Millie might be slow but she was wise, going gingerly one way and then the other, staying above the wettest sand that could swallow enough of the carriage’s wheels to necessitate a cry for help. When they did stop, it was because Millie decided to. What some called a dumb animal Anne appreciated as a special creature of God’s making, who sensed Anne’s need to pause and reflect in some semblance of solitude.

To regret the exchange of earthly pleasures for the joys of Heaven, is as if the groveling caterpillar should lament that it must one day quit the nibbled leaf to soar aloft and flutter through the air, roving at will from flower to flower, sipping sweet honey from their cups, or basking in their sunny petals. If these little creatures knew how great a change awaited them, no doubt they would regret it; but would not all such sorrow be misplaced?
~ Anne Brontë, The Tenant of Wildfell Hall

I’m thrilled to report that Without the Veil Between, Anne Brontë: A Fine and Subtle Spirit has made it onto the shelves of the Brontë Parsonage Museum Shop! Thank you to The Brontë Society!

2 thoughts on “A Feather in the Wind”