In 1839, a young curate breezed into the lives of the Brontë family. This young man was like a breath of fresh air, quite unlike any curate that the Brontë girls had previously encountered. For three short years, as well as being a diligent worker in his parish duties, he brought gaiety, romance, and humour into their lives, and an almost brotherly friendship with Branwell.
~ from The Brontë Studies, Volume 29, 2004 – Issue 1

. . . He sits opposite Anne at church sighing softly and looking out of the corners of his eyes to win her attention – and Anne is so quiet, her look so downcast – they are a picture . . .
~ Charlotte Brontë 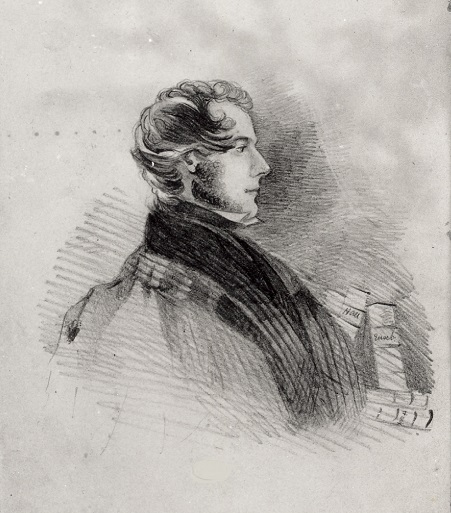 Anne could hear William’s lively chatter just outside the church, reminding he was gregarious, generous with his time and joyousness, and happiest when he was lifting others out of sighing and sadness. She chided herself for minding he didn’t observe her passing by, his occupation requiring him to be available to everyone, even silly young ladies who shouldn’t be denied a little of his sparkling company.

Anne wasn’t prepared for him walking beside her before she caught up with her aunt and brother.

“What will you do with the rest of your day?” he asked, sliding his hands down his long white cravat and folding them around its ends against the front of his heavily-buttoned frock coat.

She looked up for the sunshine that might yet peek through the dark and light clouds, a skylark singing frantically and flying as if looking for a way through them in the opposite direction the sun was. William was patient while she considered what to say, one answer in her heart and another in her head, someone else calling his name with an urgency she doubted she could ever express. The perfect afternoon activity would be a walk beyond Penistone Hill, across the high-ground, gray-green heath where curlews, golden plover peregrines, and merlins nested and by now would have some young. Even unintentional intruders might flush a few grouse out of the bracken and delight at them taking off to glide over the hair grass, cotton sedge, fern, and heather. There was always time to dally for such sights and talk to curly-horned sheep crowding for scraps of bread before continuing to the top of a steep slope, catching a glimmer here and there of the stream in the gully below. As the journey neared its end, hands would clasp to carefully descend the uneven stone steps to the waterfall weakened but its appeal not diminished by early summer. Emily’s chair would offer rest; other large stones also shaped, if not quite so perfectly, for sitting. What a pleasant diversion if the rain held off, invigorating if the wind was brisk, and respectable if Branwell came along, leaving little doubt how, as avowed in Psalm 104:24, the Lord had given them an earth full of riches.

“I hope you will excuse me.” William barely breathed and was gone.

~ from Without the Veil Between, Anne Brontë: A Fine and Subtle Spirit

William died within three weeks of contracting cholera on his visits to the sick in the parish. Anne was informed of his death by a letter from her brother Branwell, which arrived after his burial had taken place.

Was William Weightman the love of Anne’s life? Who better than Anne herself to answer … in the way that beautiful poetry tells without saying.

That voice, the magic of whose tone
Can wake an echo in my breast,
Creating feelings that, alone,
Can make my tranced spirit blest.

That laughing eye, whose sunny beam
My memory would not cherish less; —
And oh, that smile! whose joyous gleam
Nor mortal language can express.

~ from Farewell by Anne Brontë