But as above that mist’s control
She rose, and brighter shone …

from Fluctuations by Anne Brontë 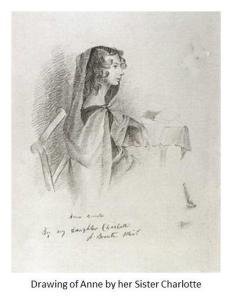 My novel Without the Veil Between, Anne Brontë: A Fine and Subtle Spirit is my love letter to Anne. Not Anne, the ‘less gifted’ sister of Charlotte and Emily … nor the Anne who ‘also wrote two novels’, but Anne herself, courageous, committed, daring and fiercely individual: a writer of remarkable insight, prescience and moral courage whose work can still astonish us today.
~ Deborah Bennison, Bennison Books

2020 was Anne’s bicentennial, celebrations unexpectedly and unfortunately curtailed by Covid-19 restrictions. Of course, honoring Anne can be done at any time by reading her poetry and prose and what others have been inspired to write about her; also, (perhaps, a way that would please her the most) by following her example of good and purposeful living achieved through resilience, faith, honesty, compassion and – invaluable during an isolating pandemic – self-containment, patience, and flexibility.

Anne thought of … a word, more than a word, a philosophy, simple but profound, out of the mouth of someone who spoke simply and succinctly, not unlike Tabby, or, in the old days, Nancy and Sarah Garrs, who sometimes shared wisdom with just a comment on the weather.

Now it was a title for a poem …

Anne stroked Flossy’s ears as she began to quietly read out loud, “‘Fluctuations. What though the Sun had left my sky—’” Her doe-eyed companion looked up, understanding nothing and everything, wagging his tail and letting it drop limply, whining because he didn’t like it when his mistress was upset. “Shh, shh. It’s all right, sweet pup. ‘To save me from despair the blessed Moon arose on high, and shone serenely there.’”

It was all right. It would be all right. Perhaps not every moment, not when she thought of who she must wait until she died to see again, or how there was less heartache but more frustration in believing she would never feel fully useful in society or even at home unless she accomplished something meaningful. Still, it could be worse if she was without the resolve to make her life fruitful, pursue a well-cultivated mind and well-disposed heart, have the strength to help others be strong, or, especially, the faith to endure and rise above endurance.

“‘I thought such wan and lifeless beams could ne’er my heart repay, for the bright sun’s most transient gleams that cheered me through the day. But as above that mist’s control she rose and brighter shone—’” Flossy looked up at her again. “‘I felt a light upon my soul!’”

Anne knew life couldn’t fail her as long as she acknowledged the blessings of animals and nature, music and prayer. She also valued family and friendship, which, of course, could be one and the same. At times it was stifling back at the parsonage, as though all the windows and doors that held her to being the smallest, quietest, last and least likely to surprise were kept locked by those who loved her for their own conclusions. Anne could never think of home as a prison, but once she flew the nest and realized she had the wherewithal to, if not quite soar, make survivable landings, she knew it was restrictive. She had always suspected being overly protected was as dangerous as being unguarded, like enjoying the rose without noticing its thorns. It wasn’t as though her family was unaware of the world and its ways. Daily and weekly doses of newspapers and magazines initiated lively discussions, mostly between Branwell and Charlotte with Emily grunting, about religion and revolution and parliamentary reform, potato famine and, closer to home, the plight of the wool laborers and sick in their father’s parish.

Anne was afraid responding to political, social, and moral issues through the amusement of fantasy was more about outwitting these realities than addressing them. She even felt some shame at having gone along with the juvenilia that made believe the world was at her fingertips, its maneuverings entertaining, romantic, and escapist, although she could almost forgive the child she was then. Halfway through her twenties, having lived most of the last four years away from her family, she was finally fully-fledged, the nature she was born with at last standing up for itself, wanting its voice to be heard, with the courage to admit she was meant to wear truths not masks.

In or away from Haworth, the best companionship was often with herself alone: the best being the reflection that wouldn’t falsely flatter for the sake of avoiding hard feelings, wasn’t eager to congratulate in order to keep her friendship, and didn’t encourage self-pity because it was wanted in return. Anne had long since decided to be honest with herself even when it meant facing a harsh reality, like the prospect of never marrying and having children. Whatever God’s will, she hoped a few of the schemes in her head, humble and limited as they were, might come to something. She could hear Emily guffawing. Why shouldn’t they? You worry too much. Yes, she did, a correction that was one of the most difficult to make if she thought she must choose between passion and dispassion.

Excerpt from Without the Veil Between, Anne Brontë: A Fine and Subtle Spirit 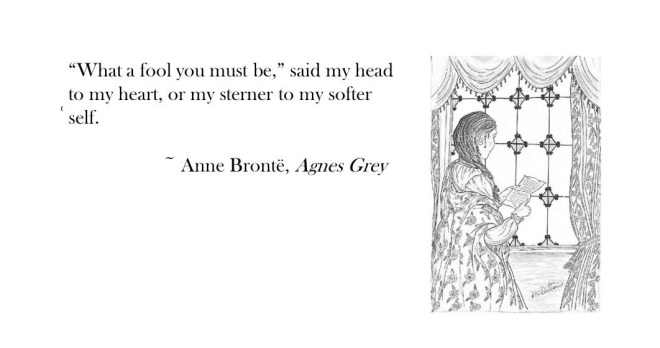 Illustration (from Without the Veil Between) by DM Denton

What though the Sun had left my sky;
To save me from despair
The blessed Moon arose on high,
And shone serenely there.

I watched her, with a tearful gaze,
Rise slowly o’er the hill,
While through the dim horizon’s haze
Her light gleamed faint and chill.

I thought such wan and lifeless beams
Could ne’er my heart repay,
For the bright sun’s most transient gleams
That cheered me through the day:

But as above that mist’s control
She rose, and brighter shone,
I felt her light upon my soul;
But now–that light is gone!

Thick vapours snatched her from my sight,
And I was darkling left,
All in the cold and gloomy night,
Of light and hope bereft:

Until, methought, a little star
Shone forth with trembling ray,
To cheer me with its light afar–
But that, too, passed away.

Anon, an earthly meteor blazed
The gloomy darkness through;
I smiled, yet trembled while I gazed–
But that soon vanished too!

And darker, drearier fell the night
Upon my spirit then;–
But what is that faint struggling light?
Is it the Moon again? 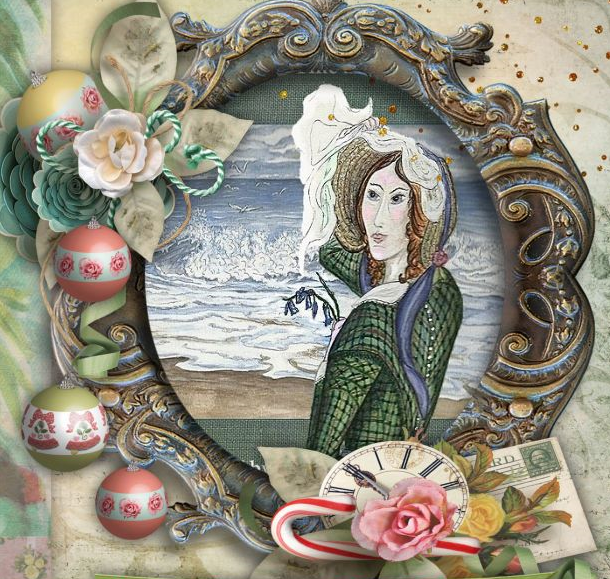