We are what we repeatedly do. Excellence, then, is not an act, but a habit.
~ Aristotle

How could I resist this quote for feeling better about repeating a post?

Well, it’s not exactly the same as before. Then what ever can be? 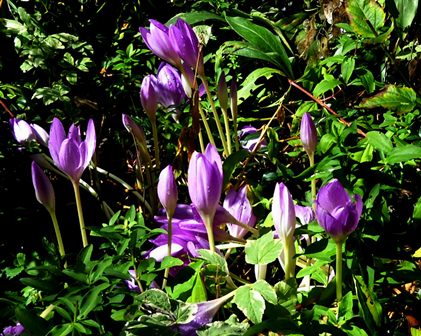 Autumn Crocuses in my garden in 2012

Autumn Crocus in my garden two days ago

Another year of restlessness like standing still, growth from withdrawal and revealing in one way and another.

Autumn Crocus in my garden this morning, the first day of Autumn

Survival in the habit of being as if never before.

There is a memory here, planted moments before it was too late.

It’s not what it seems. These are not the spring variety, waking from frigid dreams, wooed by what is to come, green showing warily yet buds often opening too soon.

These are not flowers fraught with anticipation. They’ve already been revealed, lost their clothes in the crowd, withdrawn to regrow and regroup before winter. These latent lilies are a law unto themselves, having done it all before, bending this way and that, exploding unashamed into sunshine and tears, inviting their withering surroundings to dance before the mystery of dying.

For here is immortality.  Everywhere.  And so the generous age offered a handful of corms for drilling into years she might or might not have ahead, too deep to be forgotten.

Writing note: The autumn crocus actually isn’t a crocus—it’s in the lily family (crocuses are in the iris family), flowering in the fall. Autumn crocuses send up their leaves in the spring but they die back by summer, the flower stalks rising and blooming quite indecently in fall. Some common names are: naked ladies and mysteria. Mine were given me many years ago by an older neighbor friend of my mom’s, Sue Drilling, a farmer’s wife, who was fiercely independent as well as extremely intelligent and artistic, living alone into her 80’s (no one knows for sure, as she would never tell her age…) in a large Frank Lloyd Wright style house where she had a very wild but wonderful perennial garden. The new owners have since dug it all up and replaced it too neatly with shrubs and lawns, less to care for and enjoy.

Thank you for your visit!

There is a flower in silence and motive that causes thoughts of interrupted solitude.

For a while, grand illusions grew out of its brightness and reach.

It might have been as beloved as bluebells, trembling stems and tiny flowers spread in a fragrant mist as far as the eye could see.

Such an easily admired effect. All was good. And understood. Azure waves in daylight, scented stars at night. An audience that wanted nothing more or less.

Until it was growing in less predictable ways and places. At least by those expecting it to always sparkle and sway the same.

I’ve known this self-seeding flower forever. It comes and goes, disappearing as it has to, reappearing where it will, not to anyone else’s design; perhaps, not even to its own.

Controlling this flower is a challenge. Pull it out and throw it away; being perennial it will merely find new ground. Its vulnerability finds strength in escaping boundaries that other sorts obey.

Its roots have a habit of curiosity and continuity. Lost and found in shade and filtered sunlight, its leaves hold out for dew.

There is a rumor that God almost forgot this flower, but I have never believed it.  Another, closer to the truth, claims the weight of armor almost drowned a chance for it to speak its truth.

Myosotis (from the Greek: “mouse’s ear”, after the leaf) is a genus of flowering plants in the family Boraginaceae. In the northern hemisphere they are commonly called forget-me-nots. Illustration copyrighted 2015 by DM Denton

Not all were strangers, not the little myosotis stars bursting unforgettably through the dirt and grass.

“They always come up in legions, no matter how I thin them.”

Somehow she knew what her father was saying, feeling a return of pleasure when he gave her the bouquet he had made with a few tiny daisies, too.

~ From To A Strange Somewhere Fled

Thank you for your visit!

Like Loading...
“If we could see the miracle of a single flower clearly our whole life would change.”
~ Buddha

Partially, a re-post – I just had to snap this photograph of the proud Day Lilies in my little St. Francis garden, and, of course, once again display the lovely painting just below by my mom, June. 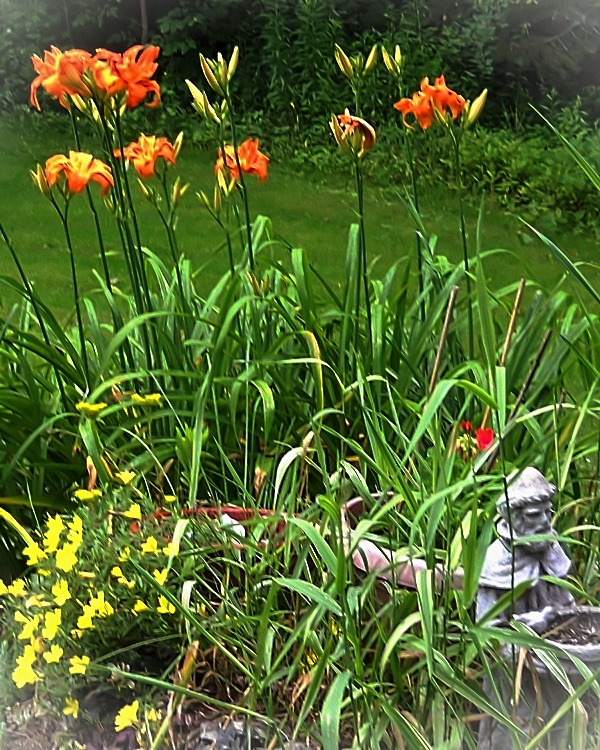 In February 2013 my Illustrated flower journal, A Friendship with Flowers, became available in print. The 58 color images made the selling price of it in paperback rather high. I must thank those who purchased it in print and hope that others will do so, especially as the holiday season is coming up. It could be a perfect gift for the flower lovers and gardeners on your giving list.

On Kindle Fire devices or using the downloadable app for your tablet, smartphone, or computer, the images are in color.

On basic and Paperwhite Kindle devices, the images are as beautifully detailed in black and white.

In A Friendship with Flowers, the gifted American author and artist Diane Denton invites us to share a healing journey she took when the flowers that surrounded her in a very English part of England gave her solace, hope and inspiration.

This beautifully produced book will not be left on a bookshelf for long; and as if the exquisite paintings (you’ll never look at a dandelion in the same way again) are not more than enough in themselves, the author also includes her unique commentary on the natural world as she studies and interacts with it while coming to terms with an unspecified experience in her life.

This combination of artwork and poetic observation, that is both personal and universal, creates a unique alchemy that calms and comforts while still leaving open the essential mystery of the natural world and our place in it. Sometimes, the author seems to suggest, it’s OK for there to be no answers; there may be no pat solutions, but there are insights and realisations, looking back to move forward (This holy rose/is another reminder/of the summer past/and yet/to come…), and new ways of seeing things (I found the snow didn’t drop/from above/but sprung from below/to cover the ground…).

The illustrations and the accompanying poetry, which is controlled, understated and pared back, combine to create a companion book that will reveal a little more each time you dip into it; you will feel (to borrow the author’s words): here’s a friend/I just got to know — /suddenly,/by the roadside,/as I was going/nowhere.

This book also includes a detailed glossary listing all the flowers shown in the beautiful illustrations throughout the book. This glossary includes the everyday and Latin name of each flower plus brief information about its habitat and the time of year that you’ll be able to spot it (easily recognisable in real life from the painstaking accuracy of the artist’s depiction). ~ Deborah Bennison, Bennison Books

In A Friendship with Flowers by D M Denton, very talented author, poet and artist, we are taken on a gentle meander through the Oxford countryside where she not only lived for several years but breathed, absorbed and became part of her beautiful surroundings. This gorgeous book contains the author’s own exquisite illustrations of a variety of flowers from hedgerow and garden, all accompanied by mellow poetic verses in her own inimitable style. Here is an example – of The Honeysuckle, the author writes: By the back door/the night comes in as sweet/as honey is to eat, like nectar/to the moths and bees/who suckle all they please;/while I can never get enough/of the scent/that can climb trees.
This is a book to treat yourself to or give to a loved one as a very special gift. It uplifts and delights at the turn of every page and is, without doubt, one to treasure. ~ Christine Moran, Journey into Poetry

A playful collection of thoughts about the names of flowers found in England, paired beautifully with the author’s delightful illustrations. My favorite, floxglove: “I am inclined to believe fairies hang up their thimbles when a sunny day is as right for dreams as a day-lit night makes idle hands.” ~ Barbara Rogers, By the Sea

May all your friends grace and heal you with

their beauty, wisdom, and playfulness!