The photo is torn,

repaired with a trace of damage,

not enough to spoil

a complexion as satiny as ribbon-roses

adorning the effortless styling of

Playfulness in a profiled pose

and a smile that seems to be thinking

of something more than

The artistic bend of an arm

pointing to possibilities at hand,

a picture of loveliness

even as petals drop

I’m marking my 62nd birthday (July 6) by remembering my beautiful and talented maternal grandmother, Marion Allers DiCesare, a recent interview question prompting me to consider – once again – her promising but frustrated and abbreviated ‘story’. She died long before I was born, but has always been a strong presence in my life, especially my sensory and creative life, through the memories of my mom who absolutely adored her – and as you’ll ‘see’ as you read on, she wasn’t the only one who did.

Her family was long established in Oak Park, Illinois, a village on the west side of Chicago that was the haunt of Earnest Hemingway’s family (my mom having babysat for his sister Sunny’s little boy – but that is a tale for another time). From a family history prepared in 1978, it is confirmed that my grandmother’s grandfather William Allers, a cabinet maker, came to the US with his wife and four children from Budby, Nottinghamshire, England in 1848; two more children including my great-grandfather Henry were born in the US. Henry married Ida Shreffler, and my grandmother Marion, their sixth child, was born March 24, 1893. She was only about 4 years old when her mother died in childbirth.

My grandmother (with a cousin) is on the right

My grandmother showed musical promise, specifically as a pianist, at an early age.

She received her entire musical education at the Illinois College of Music, which was established in 1900, graduating when she was eighteen but continuing there as a teacher.

My mom managed to rescue the 1924 faculty booklet from family records in danger of being discarded as clutter. It states that Miss Allers’ pupils idolized her, “she made an extensive study of Expression (voice training, breathing, recitation, dramatic training, impersonating, dialect, etc.) and was very “clever” as “Pianist-reader and Monologue entertainer” who “became known throughout the city (Chicago)”, and was “original and versatile.” Her repertoire as a concert pianist included Mozart, Beethoven, Chopin, Liszt, and Tchaikovsky (which I can verify from the sheet music that has come down from her). My mom also recalls her mother playing and singing popular songs from the twenties and thirties, and watching her entertaining, even comical, skits.

The story becomes most fascinating and fateful when my grandmother was approached by the American impressario Florenz Ziegfeld, who was from Chicago, to take part in a European tour with the Ziegfeld Follies.

Her family wouldn’t allow her to go as “good girls didn’t travel alone or do things like that”.

Who knows what career opportunities were missed and whether the disappointment contributed to her suffering a nervous breakdown. There is a scene in To A Strange Somewhere Fled that was inspired by her attempting to pick the flowers off the wallpaper in her bedroom during her mental and emotional collapse.

She had several offers of marriage she turned down. Then, in her thirties, my Italian blue-eyed grandfather Pierino, who was attractive, cultured, charismatic, and a bit of a scoundrel—not unlike Alessandro Stradella—came on the scene when mutual friends took him to see her perform at the Chicago Civic Opera House.

In 1995 the Lyric Opera of Chicago began a complex renovation of its home, the Civic Opera House. 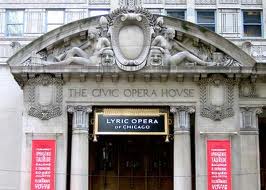 This time she defied her family to marry him—unaware he was still married to a woman in New York City—finding excitement but also hardship in her decision to do so, because, besides being a bigamist, my grandfather was an unreliable provider and often absent, engaging in dodgy real estate deals with the gangster element in 1930’s Chicago. He was very interested in aviation (my mom remembers going up in one of his very small scary airplanes), took out at patent on a new propeller blade, and became Vice President of a propeller company. You can see the photos of the propellers and factory here.

My maternal grandfather Pierino DiCesare is on the left, probably around 47 years old at the time of this photograph, Vice President of the Maynard-DiCesare Propellar Company. Although he lived until I was around ten, I never met him. After my grandmother died, he remarried, then divorced, and fell on hard times, becoming a destitute alcoholic and dying from sclerosis of the liver in Philadelphia.

After my mom and her eldest sister were born, her parents split for a while, got back together and had two more daughters, but the marriage was a rollercoaster for my grandmother, causing financial and emotional hardship. She continued to give piano lessons, until  she became very sick with breast cancer which claimed her life far too soon at the age of forty-six, my mom ten, her youngest sister only four.

My mother was heartbroken, wouldn’t go to school for months, and to this day can’t speak of her mother without tears. What a joyful presence was lost from the mortal world, but, fortunately, I have felt and continue to feel her spirit around me.

My grandmother getting her hair washed by a cousin. In the twenties she sold her beautiful long auburn hair for $50 – her family was outraged!

“Well, wouldn’t you like to come inside and pick some (flowers) off the wallpaper?”
~ from the film, Harvey, based on the play by Mary Chase

©All Artwork and writing on this site, unless otherwise indicated, are the property of Diane M Denton. Please request permission to reproduce or post elsewhere with a link back tobardessdmdenton. Thank you.