Counting down to Anne Brontë’s own Brontë200,
the bicentennial
of her birth on January 17, 1820,
today is the 198th birthday
of the youngest sister of Charlotte and Emily Brontë.

She is subject of my new novel 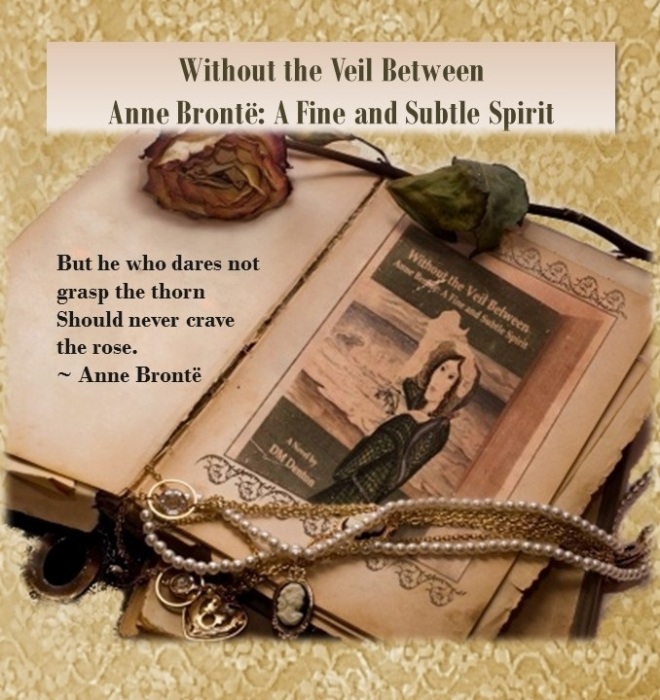 Anne Brontë comes through as a leading character in her own right, not as an understudy. Diane has written an exceptional history of a hidden jewel in the family Brontë and imbued her with a strength, a tenderness, and a will to animate and to shine.

Literary fiction has another distinctive voice in Diane Denton.

~ Martin Shone, author of three beautiful poetry collections: Being Human, Silence Happens, and After the Rain.

STC98097 Portrait of Anne Bronte (1820-49) from a drawing in the possession of the Rev. A. B. Nicholls, engraved by Walker and Boutall (engraving) by Bronte, Charlotte (1816-55) (after)
engraving
Private Collection
The Stapleton Collection
English, out of copyright

To mark Anne’s birth day, I am sharing an excerpt from Chapter Nine of Without the Veil Between, that includes an Emily initiated celebration.

It was years since Anne was home on her birthday. Emily baked an oatmeal and treacle cake a couple of days ahead of the teatime designated for its consumption to soften it in a tin.

“I’ll allow no one to refuse a piece of Annie’s parkin.” Emily, unusually, looked very pleased with herself. “I mean to give my bet’r sen some happy thoughts.” She even sang some lines from an old ballad supposedly from the time of Robin Hood. “‘Now the guests well satisfied, the fragments were laid on one side when Arthur, to make hearts merry, brought ales and parkins and perry.’”

“‘When Timothy Twig stept in, with his pipe and a pipkin of gin,’” Branwell followed on singing.

“Always the spoiler.” Emily didn’t look at him.

“Well, part of a song doesn’t tell the whole story.”

Anne briefly escaped their argument to take a piece of cake out to Tabby in the back kitchen. Easily wearied and hard-of-hearing, the old servant was trying to nap in a straight-backed chair positioned in the draft from the back door.

“Where’s your shawl?” Almost as soon as she wondered, Anne found it draped over the handle of a broom leaning against a wall.

Anne gently laid the loosely-knit shawl around Tabby’s shoulders and gave her the plate of cake.

Later, as the sisters spent a final parlor-cozy evening before Anne returned to Thorpe Green, Branwell off to take advantage of his last chance for a while to “stept in” at the Black Bull, even Charlotte admitted the liability he presented to their progress.

“The way it’s going with him, it’s better our school scheme comes to nothing. No doubt he’ll soon be home again, unemployable, even less able to provide decent company. Certainly not an example of manhood young girls should witness.”

Anne never told Charlotte as much as she did Emily, but there was no way to prevent the disturbance of her and Branwell returning home for the holidays together but estranged. As soon as they arrived, Anne fled the hours of traveling with him as though nothing ever disgusted her more. Over the weeks Branwell tried to converse with her beyond yes and no and maybe. Normally, her forbearing nature wouldn’t allow her to slight anyone, but with agitated busyness she dismissed him—to comb Flossy or clean Dick’s cage or help in the kitchen, which she rarely did, or beg Charlotte to let her read to their father who didn’t know of his son’s latest sin but might notice his guilt, so Branwell kept out of his way.

For a while Anne was as cowardly avoiding her brother, even if it meant staying in her room when he was in the house.

She wasn’t proud of her behavior. Gradually she felt more ashamed of her own choices and failings than Branwell’s, blaming her intransigence and righteousness for her failure to persuade him to stand stronger against temptation. Love was what she was made for, understanding, forgiveness and faith at the heart of her, good memories soothing the bad. Flashes of the gentle brother with his little sister on his knee, proving his talent for telling stories too entertaining to question and drawing pretty pictures he inscribed for Anne, tempted her to once more hope he might yet chose rationale and, especially, what was right, over ruin.

“Let’s expect he’ll be better and do better.” It was as if Emily had read Anne’s thoughts. “Speak no more of it tonight. Are you still working on the same poem, Annie?”

“Still wrangling with it. You know how it is, thinking it might be better with a different word or different order of words, more metaphors or less. That it might benefit from leaving some sentiments out altogether.”

Emily’s lounging took on the look of someone double-jointed with her right leg slid off the sofa and her left one lifted and bent, its stockinged foot pressed against the back of the couch. She made a feeble effort of controlling her skirt for modesty’s sake. “It’s rather pleading.”

“Entreating,” Anne corrected as she knew Emily would appreciate.

Emily winked. “If you say so.”

Anne didn’t want to read the poem out loud and spoil the evening with dread of what she was going back to the next day. For a moment, she considered sharing a little of Passages instead, an excerpt that was well-worked and entertaining. Sensing her sister’s impatience, she stood with one of her journals, opening it to its middle and flipping a few pages further. With a slow, almost tiptoeing stride, she recited as she moved around the table, because of the limited space brushing Charlotte’s back with each passing by.

“‘God. If this indeed be all that Life can show to me; if on my aching brow may fall no freshening dew from Thee; if no brighter light than this the lamp of hope may glow, and I may only dream of bliss and wake to weary woe—’”

Emily sighed as dramatically as she never naturally did.

“You always cheer us so.”

“I’m sorry, Charlotte. I won’t continue.” Anne had reached her chair after a second circling.

“No, go on. The writing itself is lovely.”

“‘If friendship’s solace must decay, when other joys are gone, and love must keep so far away—’”

“Not for me.” Emily threw her head back and closed her eyes.

Anne continued, realizing the poem was quite good and nearly as she intended. However, she hesitated when she reached the fourth verse, mustering up the courage to take a risk.

“Vice and sin?” Emily echoed. “Nothing to do with anyone we know, of course.”

“That’s it for now. I have yet to perfect the rest of it.”

Illustration by DM Denton from “Without the Veil Between”

I wished to tell the truth, for truth always conveys its own moral to those who are able to receive it.
~ Anne Brontë, from her introduction to the second edition of The Tenant of Wildfell Hall 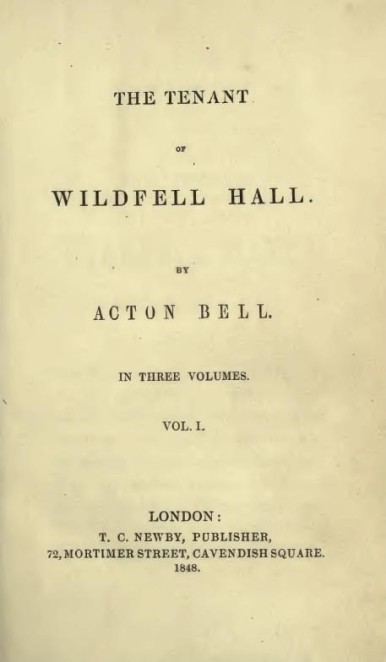 Title-page of the first edition, 1848

I allow she has small claims to perfection; but then, I maintain that, if she were more perfect, she would be less interesting.
~ Anne Brontë, The Tenant of Wildfell Hall

Happy Birthday, Anne Brontë
and
thank you
for one of the most extraordinary and transformational
writing experiences of my life!

© 2018 Artwork and writing, unless otherwise indicated, are the property of Diane M Denton. Please request permission to reproduce or post elsewhere with a link back to bardessdmdenton. Thank you.

While I ponder and process a new blog post, I will be sharing some reviews of my new novel, Without the Veil Between, Anne Brontë: A Fine and Subtle Spirit.

Here is one that, besides being eloquently written, displays such intelligent and sensitive engagement with the novel. It is from fine author, Mary Clark. I hope, if this review takes you over to her blog, you will check out her publications listed on the side bar: “My Books” and “Poetry”.

Without The Veil Between Paperback

Without The Veil Between Kindle

Early in Diane Denton’s book the young curate, William Weightman, says to Anne Brontë: “You must find such satisfaction in being able to capture those moments the rest of us let slip away and sometimes aren’t aware of to begin with.” This is an essential part of Denton’s own gift. With this ability she is able to enter the world of a shy artist who lived in the shadows of her father, brother, and sisters, and in the light of a determined and insightful intellect. Anne Brontë set herself a more difficult task than her famous sisters, Charlotte and Emily. She was on a course of an artist whose subject was her life. Making this even more difficult, she sought to achieve emotional and mental stability.

Denton shows us the tensions in the austere home of the Reverend Brontë, the…